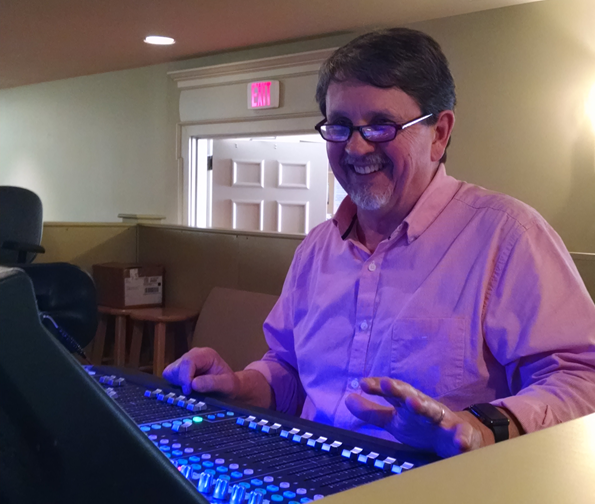 Serving at the Sound Board

Robby Cook enjoys people, yet prefers to serve behind the scenes. He can often be seen behind the sound system on Sunday morning or for special events. His thirty-two years of service in this area began with a simple request and a willing heart.

“Paul Blair asked me if I would help. I was just a regular attender,” states Robby. “I had no musical experience or singing talent, but as part of the church, I wanted to serve God in some way, and this turned out to be a good niche for me.”

When he first began, Robby was one of seven or eight men who rotated on the sound board. He serves more frequently now on a smaller rotation of sound men. “Many are not at our church any-more. Some have moved away,” he explained. “I’ve enjoyed it,” he states. “I’ve gained experience and confidence over time, although I still pray each time.”

Having taken spiritual gifts assessments in the past, his main gifts are service, also known as helps, and hospitality. He states, “I really serve when I’m there on the sound system, but I also enjoy getting out from behind it and greeting and talking to people as well. I also like to share the gospel when I have an opportunity. With a lot of things I do, I think I have a good rapport with others.”

With willingness, humility, and faithfulness, Robby serves the church and the Lord through his spiritual gifts and his personality. What areas of service fit your gifts and personality? And would you be willing to serve in an area you had not considered if someone asked you?